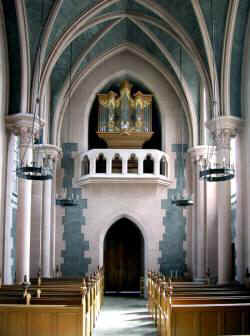 Paul Fritts & Company, Tacoma, Washington, has hand crafted the new Marion Camp Oliver pipe organ for Thomsen Chapel that is a gift from her daughter, Marion McCaw Garrison, and is dedicated to her mother’s memory, “in recognition of her devotion to music that inspired so many to great efforts and achievement.”

Opus 22 from the Fritts workshop graces the chapel’s rear gallery and embodies many of the aesthetic principles which represent a return to the core elements that personified the “golden age” of organ building; exemplified by such noted historical organ builders as Arp Schnitger and Andreas Silbermann.

Our instrument has two manuals (keyboards) and a pedalboard controlling fourteen indepen-dent registers (stops) and 17 ranks (sets of pipes); with the lower manual often being referred to in America as the Great and the upper manual in this instance being called the Positiv. Manual I (the lower manual) controls eight registers, four representing the plenum (“full-organ”) ensemble Praestant 8, Octave 4, Octave 2 and Mixture IV ranks in a addition to four “flute” registers Bourdon 16, Gedackt 8, Nasat/Cornet (the 2 2/3 + a 1 3/5 Terz). Also a single reed stop, the Trompet 8 provides either an ensemble and/or solo voice rounding out this division. Manual II consists of three flute registers - Gedackt 8 (transmitted from Manual I), Rohrflöte 4, Blockflöte 2, two “string” registers, Viol di Gamba 8, Voix Celeste 8 and another smaller scaled reed stop, the Dulcian 8 which can also serve in either an ensemble and/or solo capacity. The Pedal controls four stops which are transmitted from Manual I allowing the versatility of an independent pedal division although space limitations precluded inclusion of separate ranks for that purpose.

Casework for our new chapel organ is modeled upon a Dutch Gothic instrument originally built for a parish church in Rhenen, Holland (c. 1500’s) which is no longer extant. Not only does this particular design complement the newly restored interior of Thomsen Chapel but its scale architecturally harmonizes with its placement in the rear Gothic arched gallery in which it stands. As was customary with the great organs of that era the inclusion of color, in our instance deep red lacquered bandings representing Saint Mark's, and hand carved 23 karat gilt pipes shades adorn the façade. Several symbols contained within these carvings have significance not only for the cathedral but to our municipal setting as well. Facing the organ “reading” from the left to right-hand upper portions of the case the following images can be found: A bird’s nest containing three eggs (a reference to the Trinity) with parenting birds perched on the edge which honors Earth Ministries originally founded from this cathedral parish; each of the three protruding case “pointed towers” have highly ornamental scroll-like filigree containing sea creatures pertaining to our west coast port setting. The two upper fields of carvings flanking the central tower have owl heads peering out, representing wisdom but also reference a long-held Advent/Christmas tradition instituted by our head sexton of including an owl among the greens gracing the cathedral during yuletide. On the upper right-hand case side is a musical lion playing an ancient stringed instrument flanked by an early reed-like instrument along with a lyre providing not only the historical iconic figure associated with Saint Mark's but also pays tribute to the multiple, celebrated music ministries which have drawn so many to Saint Mark’s Cathedral over the years.

Within the case the pipework stands upon the windchest which is connected to the manuals and pedalboard by a completely mechanical means known as tracker action. Thin wooden strips called “trackers” connect each key to a “roller” on the rollerboard, thus transmitting vertical motion to lateral, and consequently connecting the key to the correct pallet (pipe valve) within the windchest. Stopknobs placed adjacent to the keydesk (console) are also mechanically activated and cause the “sliders” (stop action) to be in either an “on” or “off” position thus offering the organist a choice of individual and/or combined tonal colors. In addition the Nasat/Cornet stop has a “half-draw” position meaning that half-drawn only the Nasat can be played but fully drawn adds the 1 3/5 Terz resulting in a II rank Cornet option. Slider windchests possess the merit of not only being mechanically superior to other types but also afford the best conditions for producing beautiful, unforced pipe speech while occupying a minimum of physical space.

Pipes for the façade of this organ were made from a custom alloy with a very high tin content (approximately 95%) which imparts a “silvery” tonal characteristic to the overall sound plus a small percentage of other metals added for physical strength. Some inside pipes were also made from this metal while others were fabricated with a high lead content. Wooden pipework is craft-ed from long seasoned fine grained White Oak as is the organ case itself, which has been hand rubbed, oiled and finished to harmonize with the chapel’s original furnishings from Denmark.

Other materials used in construction of this organ include bone for the manual natural key coverings (with beveled edges), Ebony for the manual combs (sharps and flats), Maple and White Oak for the pedalboard, Basswood for the carved pipe shades, Ebony for the stop knobs with antique ivory tipped ornaments; other woods include Oak, Poplar, Redwood, Beech and Sugar Pine. Finally there is also Ebony inlay set in the manual key cheeks, keydesk moldings as well as in the music desk itself with an added special, whimsical embellishment of having the manual nosings (key ends) lacquered a brilliant red (again paying tribute to St. Mark) which repeats the bandings of color found within the upper casework moldings.

Speaking from the façade of the organ are the Praestant (from the Latin Praestare, meaning “to stand in front of”) pipes which are placed at the front of the windchest due to their size and tonal importance in addition to establishing the architectural design for the remaining organ pipes behind. Three of these Praestant pipes (centered in each pointed case tower) have been “embossed” which provides three dimensional, geometric designs in the metal and all façade pipes have had their “mouths” gilded with 23 karat gold leaf which is four millionths of an inch thick. This placement is not only acoustically favorable but allows for visual unity and beauty as well.

Tuning has been accomplished by a method known as “cone-tuning” whereby the tops of all “covered” pipes (Bourdon 16, Gedackt 8 foot and Rohrflöte 4 foot) are soldered fast while the open pipes (almost all the remaining registers) are cut to length and tuned with metal “cones.” Hence, the instrument will need overall tuning only once every five years or so with the exception of the two reed registers which due to their construction require more frequent attention.

“Voicing” is a process in which the pipes are made to speak or sound. This involves adjusting each pipe mouth so that it will speak with clarity and purity of tone throughout the entire rank in addition to blending well with all of the other registers. Mr. Fritts, himself, has voiced our organ and unlike many other builders has done so within the chapel where the organ will be heard and played, thus assuring optimum aural results.

These and many other similar refinements distinguish the artisan master-craftsman from that of a lesser builder. We are therefore indeed fortunate not only to have an instrument of lasting tonal and visual beauty but one which exemplifies an elegance and inherent integrity characteristic of the greatest traditions of the organ builder’s art - Soli Deo Gloria!

*Transmissions from Manual I 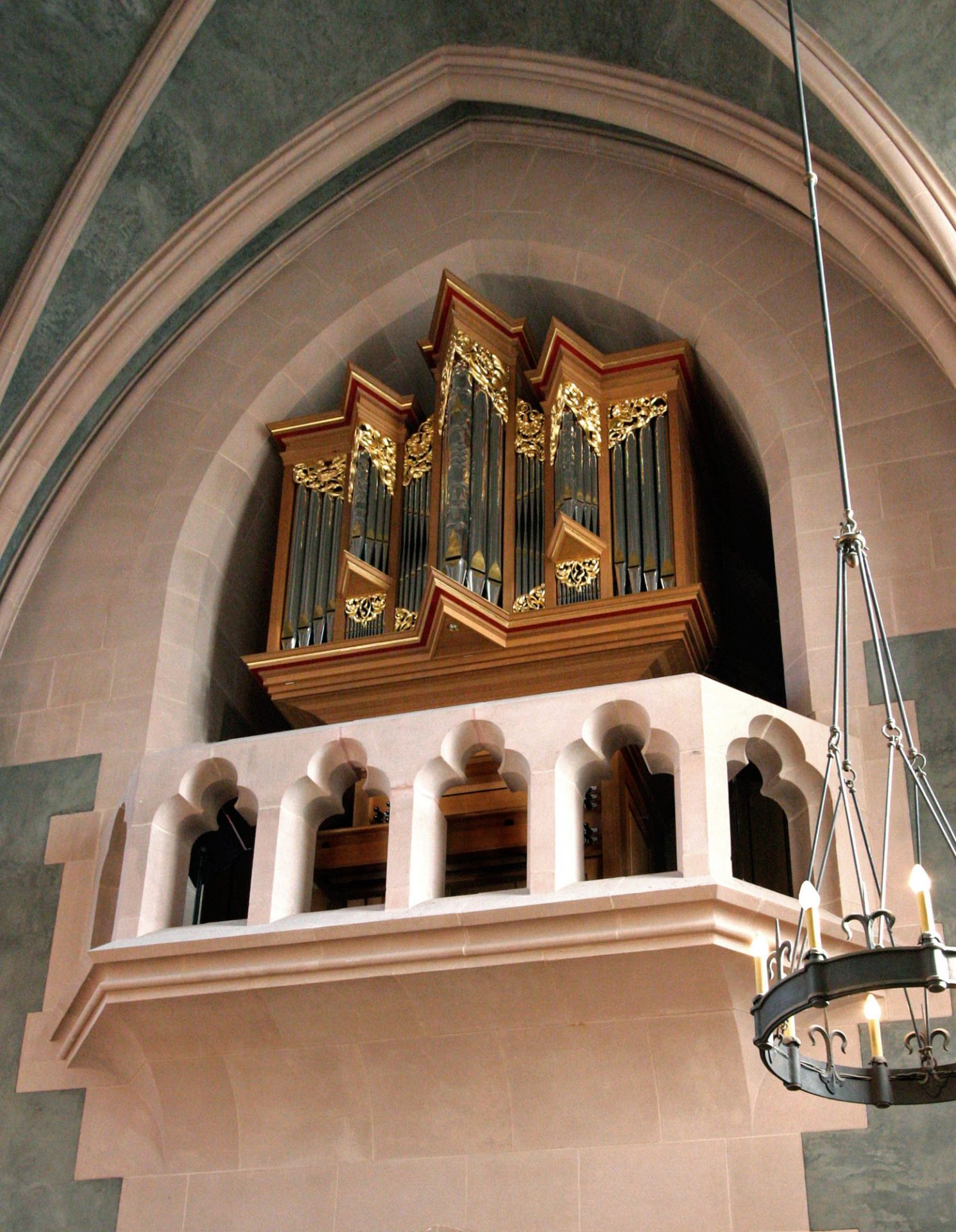 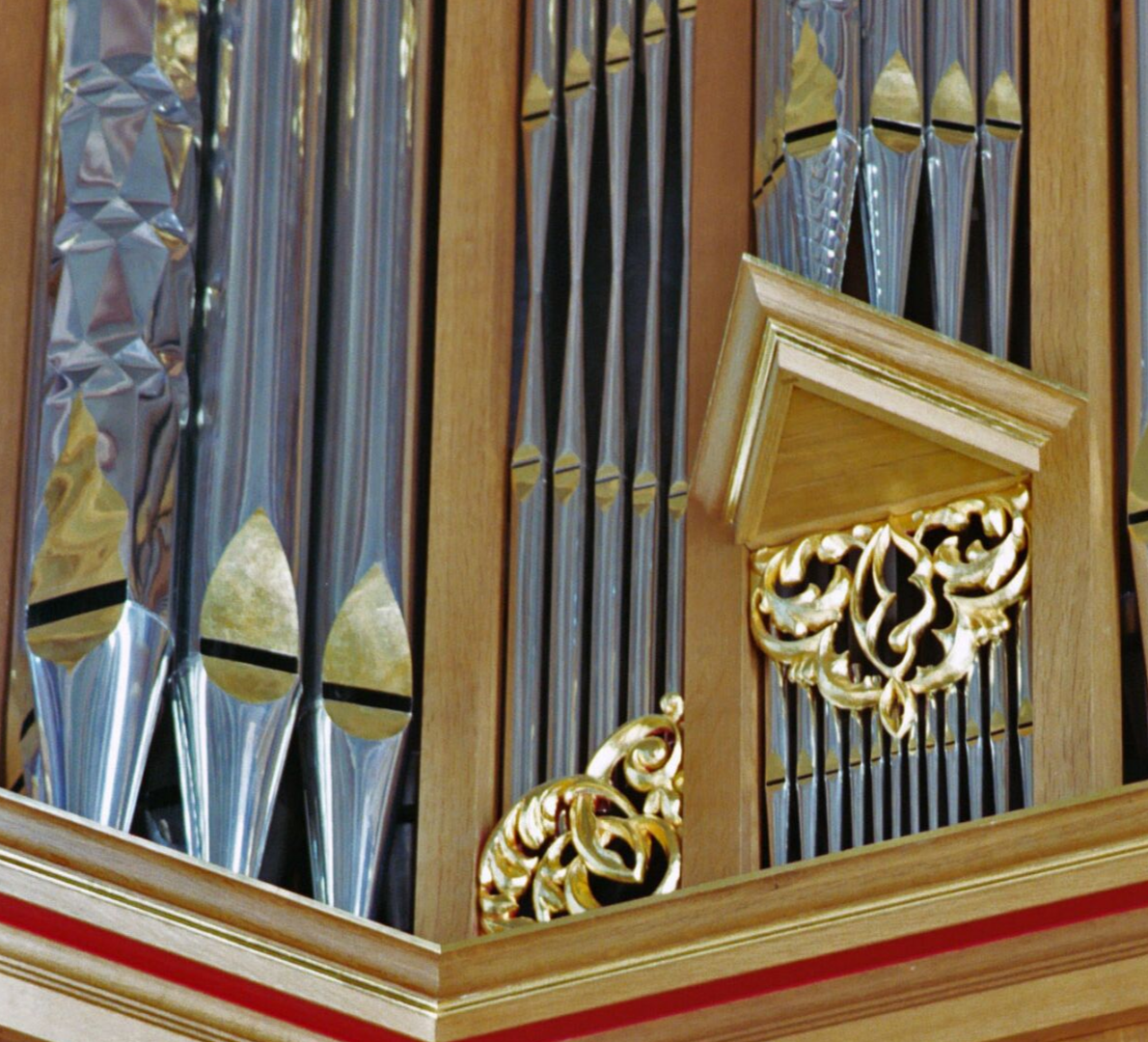