By engaging local, national and international artists, the Visual Arts Ministry explores the intersection of art and spirituality.

Currently in the Cathedral Nave

by Julie Speidel
Acclaimed Northwest sculptor Julie Speidel has created a Baptismal Font for Saint Mark’s, in white Vermont marble and patinated bronze, which responds to the unique qualities of space and materials in the cathedral nave. Speidel’s sculptures engage an array of cultural influences, reaching back through antiquity to the stone- and bronze-age peoples of Europe, the early Buddhists of China, the indigenous tribes of her native Pacific Northwest, and on into twentieth-century modernism. The artist's design for Saint Mark’s Baptismal Font was influenced by the cathedral’s own architectural elements, incorporating reflections of its rose window, a patina mirroring the Flentrop organ pipes, and geometry mirroring its arched windows. The sculpture was also inspired by the artist’s school-age experiences in and around the cathedrals of England, including a chance encounter with the Archbishop of Canterbury. 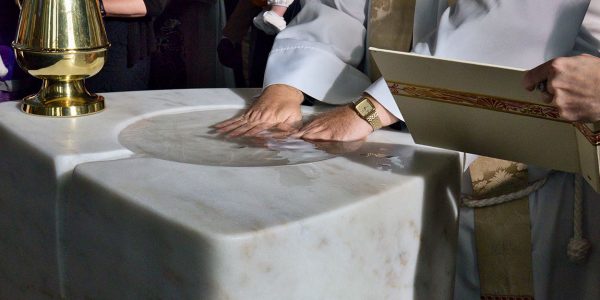 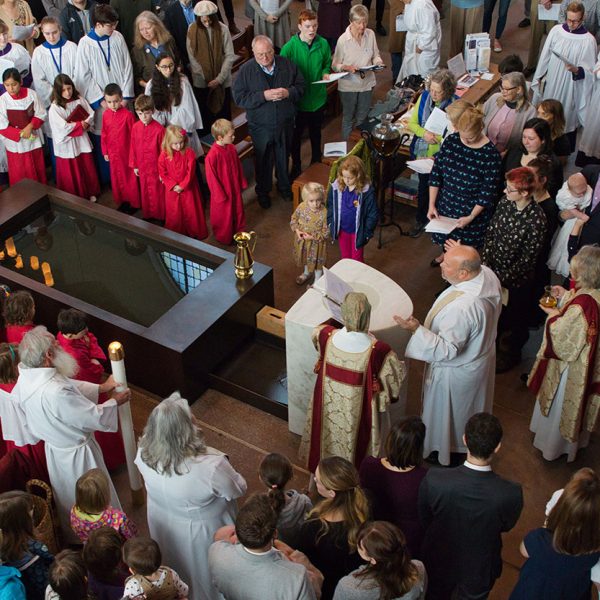 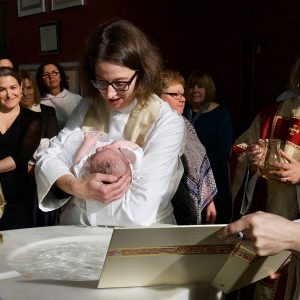 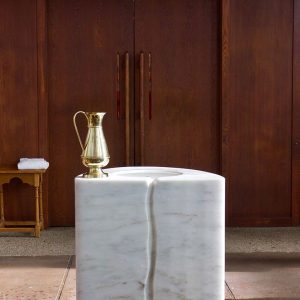 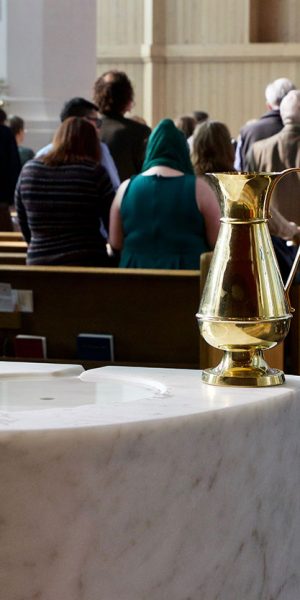 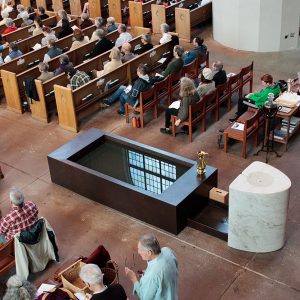 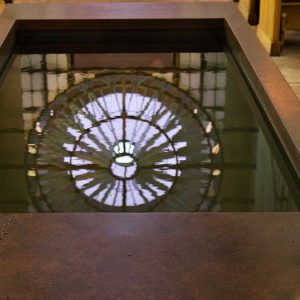 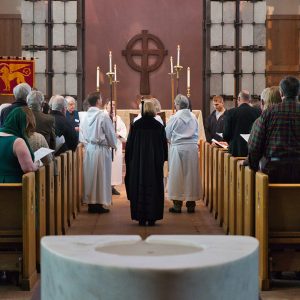 We Are One
oil paintings by Lawrence Pitre
May–June 2019
Pitre’s paintings depicting the history of the Central District—historically one of Seattle’s most diverse neighborhoods—act as a tribute to the memories of our past, present, and contemporary life. His bold figures invite us to remember the stories that connect us to a city, to a place, and most importantly, to one another.

Sanctuary
site-specific textile installation by Josh Faught
January 2017–October 2018
Josh Faught creates a textile that extends the length of the cathedral’s massive southeast pillar, still on display today. Through woven texts, sheet music, DVDs, and archival documents affixed to the textile’s face, the work integrates popular and sacred music, a supernatural soap opera, and records of gay politics, sexuality, and culture in Seattle. Bringing together craft, sociopolitical, and personal histories, Sanctuary also links expressions of romantic and erotic love with songs of praise and prayers. Read more about the work here and check out the Art in America feature on this piece here.

And I, Francis
Series of seven oil paintings by Kathleen Frugé Brown
Kathleen Frugé Brown conceived these seven scenes from the life of Francis of Assisi in response to the question of what it would be like to be Francis—we see the scenes as if through Francis’s eyes. The paintings of this series were begun after the artist returned from a year in Italy; they are her homage, not only to Francis, but to Giotto and Cimabue, whose frescoes inspired her to tackle the subject.  The painting The Death of Francis (After Giotto) is based on Giotto’s painting of the same subject in the church of Santa Croce in Florence. The paintings now belong to Saint Mark’s Cathedral and are are displayed to occasionally in the alcoves of the Hallway Gallery through Christmas.

Protagonist
prints by Sara Alfageeh
June 4–September 23, 2018
Highlighting different points in Alfageeh’s journey as a graphic illustrator, Protagonist considers the various sources of characters that shape our own story. By allowing the work to be informed by both her own identity and those she has come in contact with, Alfageeh provides a place for diverse values and experiences to find a voice. Within this collection the viewer is confronted by images that both rely on and undermine traditional visual narratives; we see patterned henna broken up by familiar bandaids, a collection of weeds growing where a face should be, and a tiger’s roar undone by a perched listener. These visual dialogues invite the viewer to consider the power of images to validate or reject the narratives we are living into.

I AM
by 31 artists from the Middle East
June 10–August 7, 2018
This exhibit celebrates the rich, diverse and pivotal contribution that women make to the enduring global quest for harmony and peace. The I AM exhibition is designed to address stereotypes and challenge misconceptions of the "other." A visual celebration of the crucial role that Middle Eastern women play as guardians of peace, I AM celebrates their strengths and rich and diverse contributions in the enduring global quest for a more harmonious and peaceful future. The exhibition is organized by CARAVAN, an international peacebuilding arts non-profit that focuses on building bridges through the arts between the creeds and cultures of the Middle East and West.

Remembrance
bronze sculpture by Midori Saito
March 11–June 3, 2018
The metal flowers in this installation act as reminders of the enduring relationship between the living and the dead. In traditional Japanese Buddhist funerary practice, mourners place fresh flowers on and around the departed person in the casket to say the last goodbyes. Once it is filled with flowers, a lid is placed and sealed for cremation. The body adorned with flowers is burnt to bones and ashes. Confronting the material transition of the brightness of flowers to the colorlessness of ashes grants us a glimpse of life's fleeting reality. The loss will never be recovered; only memories remain. In many respects, mourning never ends and this piece stands as a physical emblem of the acts of mourning that accompany us throughout our lives. These flowers, made from metal, will stay fresh for as long as it takes to remember and honor a beloved life.

Stations of the Cross
sculptural reliefs by Virginia Maksymowicz
Lent 2018 (February 14–March 30)
From Ash Wednesday through Good Friday, 2018, Saint Mark’s exhibited Virginia Maksymowicz’s Stations of the Cross, cast sculptural reliefs in a tradition of religious imagery that dates back to the 13th century. Maksymowicz worked with a variety of models, culled from a wide range of ages and ethnicities. She explains, “I wanted the narrative of Christ’s passion and death to be represented in a way that is tensioned between the “specific” and the “universal.”

Read the article in the Episcopal Journal about the Stations

Check out the feature in Saint Mark's quarterly magazine, The Rubric