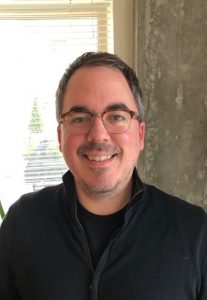 Michael has been a member of Saint Mark’s since 2014, and became involved in several liturgical ministries, including altar guild, verger, acolyte, thurifer, and assisting lay minister; and he also sang in the Cathedral Choir for a time. He was elected to the vestry in January of 2019, but resigned from his vestry role after accepting this new position. Michael has a passion for liturgy and hymnody, and a faith formed deeply by Anglican spirituality and tradition. Michael and his dog Fritz moved to Seattle in 2014 from Kentucky, where he was heavily involved in the parish life of his former church. He has a degree in International Studies and German from Indiana University, and was a business manager and Licensed Customs Broker for 19 years at UPS Supply Chain Solutions before accepting his new role here at Saint Mark’s.