Saint Mark’s Cathedral acknowledges that we gather on the traditional land of the first people of Seattle, the Duwamish People, who are still here, and we honor with gratitude the land itself and the life of the Duwamish Tribe.

What is a Land Acknowledgment?

A land acknowledgment is a statement to formally recognize that a building, or gathering, or event is on land that originally belonged to Indigenous people who lived in the area long before European colonization. It is offered to pay tribute to the first inhabitants of the area, whose land—whose home—in many cases was captured, stolen, or otherwise unethically taken from them.

The tribe or nation does not have to write the acknowledgment—that is the heart-work of the organization that wishes to offer respect and build relationship—but land acknowledgments should be created with guidance of representatives from the Indigenous tribe or nation local to the area. The Duwamish Tribe, the Indigenous people of Seattle where Saint Mark’s Cathedral is sited, encourages interested organizations to begin the process of writing land acknowledgments, and then seek clarification and feedback once a statement has been drafted.

Land acknowledgment and support of the priorities of the tribe that lived and thrived in the land that is now Seattle—and are still here! (or the First Nations of wherever you may live!)—is a justice issue with heightened recognition now at this time of this nation’s, and our own, awareness of the ravages of white supremacy and racism.

At Saint Mark’s, a Land Acknowledgment Committee was charged and overseen by the Vestry to develop land acknowledgment language that, in a spoken form, would initiate our services and gatherings, and, in written form, be included in our leaflets, signage, and other printed materials. The committee used information from the Native Governance Center, the website for the Duwamish Tribe, and land acknowledgments from other churches and nonprofit institutions as resources to create initial language that we felt best represented our intentions in the overture. The words are neither wildly original nor elaborate, but concise and authentic to our respect and our desire for building deeper and ongoing relationship. 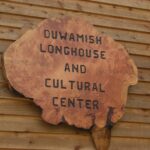 To this end, members of the committee visited the Duwamish Longhouse and Cultural Center to meet people one-on-one, to learn more and understand more about the Duwamish, their history, and the issues that are vital to them. The Dean of the cathedral, The Very Rev. Steven Thomason, spoke with Tribal Chairwoman Cecile Hansen to invite her input on how the land acknowledgment could best serve the interests of the Duwamish people (who advised brevity!)—and the pending version was brought to the Longhouse for input before final approval by the Vestry at its April 2021 meeting.

Words matter. Certainly a land acknowledgment with no intention and action to learn and build deeper relationship and follow the tribe’s lead in support of their priorities is just words—but even “just words” make someone think, raise questions and awareness, start discussions. Saying the words that acknowledge the people whose land we stand upon is startling to some, thought-provoking to some, and more than words: a call to attention and action for the Saint Mark’s community.

Though an important element in raising awareness and supporting the life and priorities of local indigenous tribes and nations, land acknowledgment is only one step, and must be more than words. For the Duwamish Tribe, there are many pressing concerns that demand support and change—most urgently, long-denied federal recognition that would immediately begin to address economic and cultural injustices – and the cathedral community looks to continue to listen, learn, and act to be part of that support and part of that change.

In the 19th and 20th centuries, Indigenous children across North America were stolen from their families and forced into institutions whose explicit goal was the complete eradication of Native culture, language, and identity—that is, cultural genocide. The Episcopal Church has been complicit in the creation and operation of some of these institutions. Presiding Bishop Michael Curry and President of the House of Deputies Gay Clark Jennings have released this statement on this shameful history, calling for the creation of "a comprehensive proposal for addressing the legacy of Indigenous schools" within the Episcopal Church, and supporting a process of truth-telling and healing on the national level.

More information about this ongoing process, and a webinar titled Native Voices: A Response to The Episcopal Church’s History with Indian Boarding Schools, may be seen on the website of Indigenous Ministries of the Episcopal Church.

The Duwamish speak eloquently and clearly on their own behalf:

All Real Rent funds go directly to Duwamish Tribal Services (DTS) to support the revival of Duwamish culture and the vitality of the Duwamish Tribe. We can individually pay Real Rent, too.

In April of 2021, the Mideast Focus Ministry sponsored a screening of the award-winning 2016 documentary Promised Land, which tells the story of the Duwamish and Chinook nations, and their ongoing struggle for acknowledgment by the federal government of the United States. If you missed the screening, you can purchase a DVD of this powerful film.

Other documentaries which address the issue of federal acknowledgment include Princess Angeline and Maiden of Deception Pass. 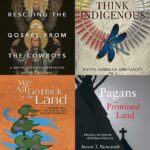 The Rev. Rachel Taber-Hamilton and Sue Tait, Director of the Diocesan Resource Center, have compiled an Indigenous Reading List for the Diocese of Olympia, including such topics as the Doctrine of Discovery, Land Acknowledgement, Bridging the Christian/Indigenous Relationship, and Native Spirituality & the Environment. Find the list here.

If you’d like to be part of the call-to-action racial justice meetings and events at Saint Mark’s, join the mailing list by emailing Dean Steve Thomason, sthomason@saintmarks.org.